"CareySound has been providing quality production for us for well over 20 years and they have never let us down. CareySound always delivered what they promised, often more, for the best prices.  I recommend Carey Sound without hesitation!"

"Utilizing state-of-the-art tools and years of personal experience their great staff worked tirelessly to make sure every minute detail was covered flawlessly. They were a pleasure to work with and really came through for us. They helped us get it right the first time."

"I spent days researching audio rental places in North Carolina for my wedding and most wouldn't give me the time of day! Then I spoke to Carey Sound and they had exactly what I needed at fantastic prices clearly posted on their website. Great people - great gear - Thanks guys!"

"CareySound stands firmly behind the quality of their work and treated us like one of the family. You can expect the best with them on your team."

The special event production division of CareySound has grown exponentially in the last few years and we have decided that it needed a new home of its own on the web. We have moved the following resources to the new sight:

And Did I Mention Pictures

In the Idea Gallery we have (over 400 and counting) pictures to get your creative juices flowing taken at recent CareySound events.

The Between Us section of the site features articles specifically geared toward event production topics such as our newly posted article on the recent trend in drapes.

This was taken at last years banquet in Cone Ballroom on the campus of UNC-Greensboro.

This years event after CareySound performed it's magic.
(Click on an image to enlarge)

We have the recipe for your perfect wedding. Lighting, drape, dance floors, DJ systems, wedding arches & chuppahs - for a day as unique as you are.

The perfect backdrop for your wedding. See more pictures from this wedding by going to our Wedding Day section under Event Production above and selecting Hilton Double Tree.

CareySound has some new tricks up is Special Event Production sleeve. 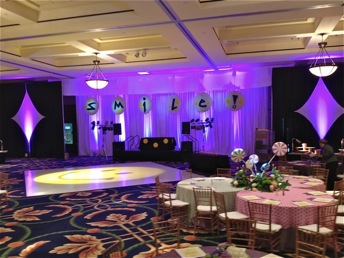 Our latest client was all smiles to see her vision set into action. Everything was in motion last week in Roanoke to the delight of guests to this private party, from the rotating floor gobo to the synchronized signage. With CareySound on your side the possibilities are almost endless. Call us NOW to see you dreams turned into reality.

One Persons Music Is Another Persons Noise 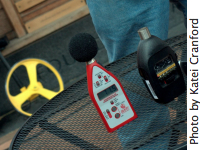 Greene Street Nightclub is once again in the epicenter of a storm in downtown Greensboro. A few well healed residents of the recently completed downtown condominiums in the Center Pointe high rise objected to the late night roof top activities at the nightclub less than a block away to the south. This latest controversy takes the form noise complaints form the condo residents. In a rush to appease these affluent downtown residents City leaders are in the process of writing an new noise ordinance that if enacted would place onerous new restrictions on both the Greene Street Nightclub and everyone else engaged in activities in Greensboro's thriving downtown entertainment district. This discussion will no less than determine whether an active music and arts scene 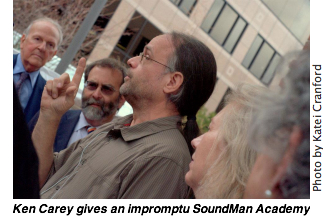 will continue to drive business and residents to downtown Greensboro with the tapestry of sounds that accompanies it or if local residents will once again have to leave town to seek entertainment elsewhere and leave us with a downtown that is largely boarded up and derelict like it was a few scant years ago. The very thing that helps make Center Pointe a great modern urban residence, a vibrant and active center city, is in danger by regulation. Let's hope the citizens of Greensboro resolve this controversy amicably before downtown looses its character and a whole lot those working downtown loose their livelihood. Join the discussion. 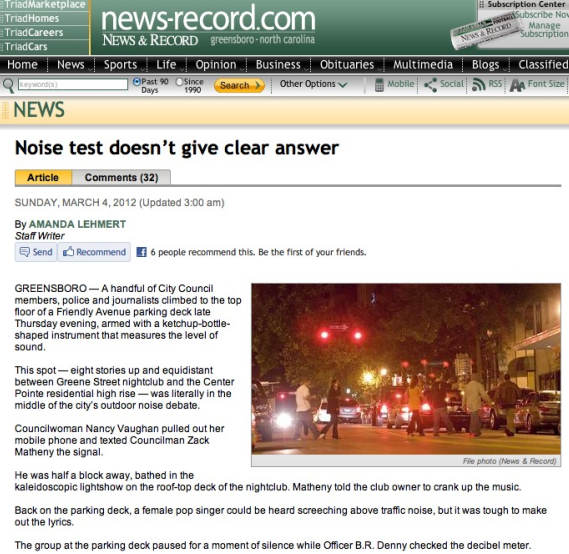 It's hard to imagine how much hassle it has been to move just two units down to Suite G in the same building - that's less than 50 feet to the right but trust me, it was no picnic. A couple of days drug into well over two weeks and we are still a little disorganized and our store sign is still waiting to be moved, who knows when that will get done, and we still haven't got our phones straightened out yet. Of course this all had to happen during one of CareySounds busiest Februarys in our companies history.


We appreciate you patience with us during the move while we get all of the kinks worked out. The one thing that has not changed is this website and our email system so if you can't get us on the phone or find our new door (two doors down to the right on the end of the building) then please send up a smoke signal us an email and we will call you right back - I promise! 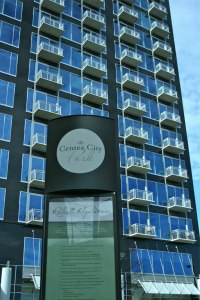 The hills park is alive with the sound of music. The sparkling fountains, beautiful sculptures and lush gardens of Center Park located in the heart of downtown Greensboro have been augmented with a major new feature. Those green cylinders that have been seen springing up amongst the foliage in the park are not some exotic new plant, but are instead 22 new carefully placed high fidelity loudspeakers that ring the perimeter of the park making it the largest surround sound system in Greensboro.

CareySound had presented the idea of a background music system some time ago. Last spring several spontaneous gatherings occurred in downtown Greensboro and park operations made the decision to dramatically increase the official event schedule in the park to creatively channel the energy of the increased activity in the downtown area and encourage more family participation in park activities. The idea of adding a distributed background music system in the park was revisited and CareySound was tasked with the job of design and Implementation. 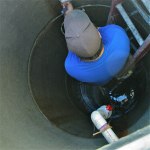 John Carey puts some finishing touches to the installation of the new audio system last week that was began in mid January. 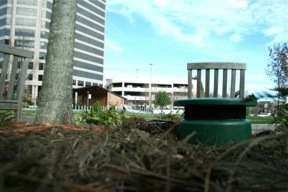 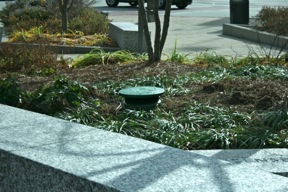 Twenty two buried loudspeakers hide among the plantings in the park.

It was "Back To The Future" at the Homestead Resort and Spa in Hot Springs, VA this last weekend as CareySound deployed its transformer magic for the Associated General Contractors of America conference.

Guests traveled trough a time tunnel on their way to a "Back to the Future" themed recepetion that was replete with Soda Shop, High School Dance, and De Lorean Time Machine replica. 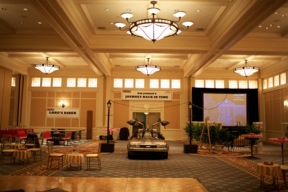 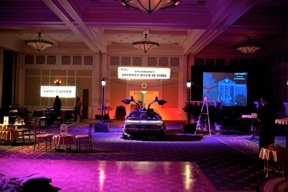 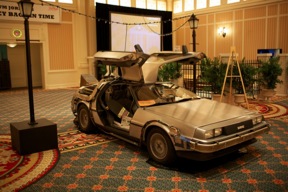 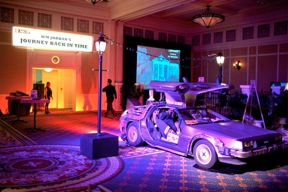 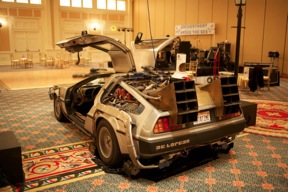 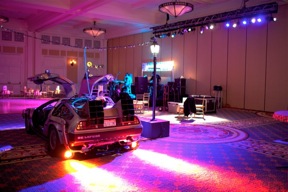